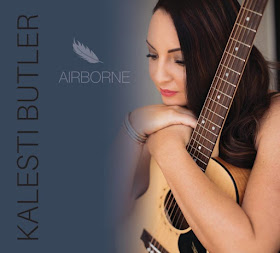 Over the past year or so, whenever I've listened to ABC Country, I've heard the song 'She's a River' by Kalesti Butler, and each time I've wondered what Kalesti Butler is up to. As it turned out, she was up to the creation of a new album, Airborne.

Butler grew up on a cattle station in the Gulf Country in Queensland, so she is steeped in country - and country music. Airborne is authentically country, drawing on stories that evoke the landscape and the lives of people living in it, and it's contemporary too. Butler has a lovely voice that carries these stories of land and love very well. Not all the songs are written by her -some are written with her mother, Val, while others come from completely different pens, including that of Luke O'Shea - but she makes them all her own.

Australian country music is competitive: any emerging artist, as Butler is, has to contend with the robust, experienced talents of artists like Kasey Chambers and Beccy Cole. Butler offers something different yet complementary: she is telling authentic tales of country life as she knows it and the authenticity is there in every note she sings. Like Chambers and Cole, she is not afraid to be vulnerable nor to entertain.

Butler's career began at the age of three,when she appeared at the Charters Towers Country Music Festival, so it's not surprising that she sounds comfortable on this album, as if she has arrived at a place and time she was meant to. Airborne is a strong piece of work. That early song that ABC Music has on regular rotation was no fluke: with Airborne Butler has made a significant contribution to Australian country music,